A recent study published by Tutela showed that large US Wi-Fi/cable ISPs who are also MVNOs gained 50% of mobile postpaid growth in Q2 2019. In this paper, we’ll analyze the reasons for their success and examine new opportunities that MPTCP can unlock for such players. We will refer to them as MVNO-ISPs from now on.

Threatened by MNO fixed-mobile converged offers, designing new offers with a mobile component became essential for MVNO-ISPs to grow. The first step to enter the mobile market is to have wireless networks capable of delivering the best mobile data quality of experience (QoE).  Leveraging existing Wi-Fi networks and rolling out new hotspots in very dense areas / areas of interest was not enough as coverage gaps still needed to be filled. Becoming an MVNO and so benefitting from high-speed mobile infrastructure was the fastest way to guarantee a high quality of service almost everywhere.

By complementing their Wi-Fi footprint with high-speed mobile network coverage, they were able to offer a nationwide fixed-mobile service to compete with the existing large players. However, as an MVNO, each MB transported has a real cost.  With the rise in streaming video, a plethora of data packs with high volume and sometimes unlimited bundles flourished. It therefore became risky for MVNOs to align their data packs with existing mobile offers. By enabling unlimited Wi-Fi access in their mobile bundle, they offered an alternative for consumers and the number of new subscribers acquired in Q2 2019 seems to confirm this winning strategy.

Wide and fast Wi-Fi network: a precious ally for differentiation

In the US and in many EU countries, Wi-Fi speeds are higher than mobile speeds (fig. 2), mainly driven by the massive roll out of high-speed networks (cable, FTTx). As mobile data users are looking for the best deal (price & QoE), they prefer using Wi-Fi services, when possible,  due to better QoE and lower costs than cellular services. 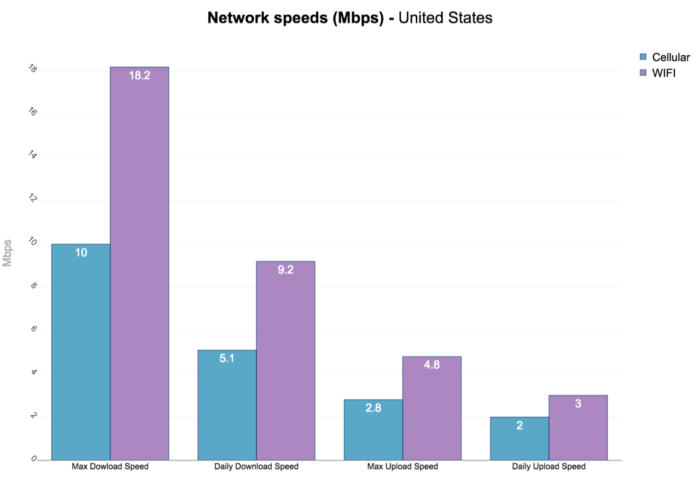 A large WiFi presence can be clearly a competitive edge for MVNO-ISPs especially inside buildings where cellular and Wi-Fi networks overlap.  Most of the time MVNO-ISPs’ subscribers would prefer to connect to Wi-Fi hotspots in order to get a better Internet experience and save mobile data charges on their devices. This change of usage behaviour will also benefit the MVNO-ISPs as part of mobile traffic will be offloaded onto Wi-Fi networks, thereby reducing costs for them. For instance, XFinity mobile (from Comcast) has offloaded ~6% on its total traffic onto its existing Wi-Fi hotspots. And this is only the beginning.

Some MVNO-ISPs such as Comcast1 and Altice USA (fig. 3)  have launched unlimited data packs to compete with existing MNOs. It is worth noting that mobile users who subscribe to unlimited data packs from MNOs or MVNO-IPSs can enjoy high-speed Internet only until they reach a set amount of data2; if they go over this limit then speeds are lower, creating possible frustration.  In contrast, by enabling unlimited Wi-Fi access, MVNO-ISPs can bring additional user benefits:

Other technologies such as CBRS small cells3 are being explored by MVNO-IPSs  in order to expand their wireless coverage and so reduce dependence on MNO mobile infrastructure as much as they can.

However, handovers between Wi-Fi and mobile networks can lead to impaired QoE. When walking away from a Wi-Fi hotspot, users are still attached to it while the signal weakens, affecting the customer experience. The user may then need to manually switch to their mobile network. As it can become annoying to do so each time a user walks away from a Wi-Fi network, we will introduce in the next section a mechanism that will manage this handover automatically and seamlessly.

One of the first companies which looked to overcome network reliability issues was Apple. When they introduced Siri Assistant they noticed that many unsuccessful Siri requests were made by users when leaving home. As the app was still connected to the home hotspot, connectivity worsened as the Wi-Fi signal weakened. To tackle this challenge, Apple enabled Multipath TCP (MPTCP) for Siri in 2013.

Multipath TCP is a standardised evolution of TCP which enables a data session to be conveyed simultaneously over several paths using different access networks . The “interactive mode” used by Apple for Siri is an MPTCP capability which selects the best network to send / receive data packets. Since iOS 7 this automatic and smart handover between networks delivered positive results. A reduction in network failure of 20% and improved responsiveness for the 95th percentile of Siri users has led Apple to enable MPTCP for iOS for third-party developers as well as in Apple Music & Apple Maps.

Latterly the 3GPP, the mobile standardisation body, selected MPTCP for its ATSSS (Access Traffic Steering, Switching & Splitting) function defined in 5G Release 16, which is expected to be completed by June 20205. ATSSS will play a central role in 5G & WiFi convergence in the 5G architecture and can be used today for 4G/LTE & WiFi convergence in an overlay solution provided by Tessares.

Fig. 4- ATSSS capabilities and the benefits for the end-user

MVNO-ISPs can benefit from this overlay solution today, enabling seamless handover for an optimum wireless user experience while offloading more cellular traffic onto their WiFi networks, reducing MVNO costs. This offload mechanism is triggered in real-time and automatically follows the rules defined by an operator’s policies. Follow this link to learn more about it.

If you miss the blog post on how to offload more mobile data traffic onto home Wi-Fi, have a look here.

If you would like to assess what MPTCP can do to support your business or if you are just curious about this technology, feel free to contact us at contact@tessares.net.

This week Tessares exhibited at MWC’21 in Barcelona. We went there for the purpose of […]